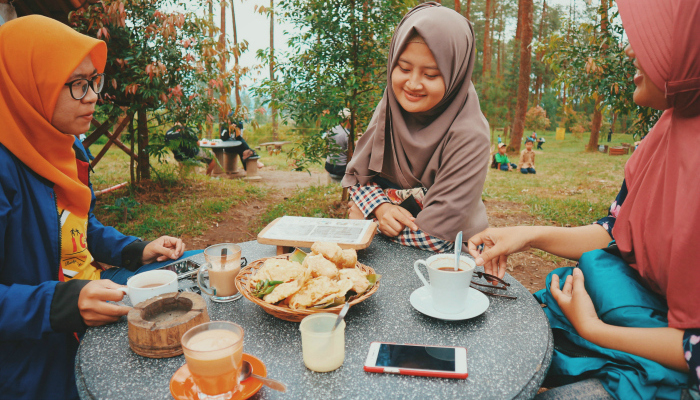 A Beyond advocate, Emma, was challenged by the course she took through her college about five years ago taught by two senior staff at Beyond. During this course she was challenged with the idea that Jesus’ followers should live their lives in an openly spiritual way. Through her conversations with various Beyond team members, she learned to be more transparent about her faith.

This transparency radically transformed the way she engaged with the lost. Instead of “evangelism” feeling like a task to be done, it began to flow out of her in a natural way. Over the years Emma has seen many lost people engage with Scripture for the first time because they knew she was an openly spiritual person, and they wanted what she had!

Another Beyond advocate who is currently being mentored by Emma shares a simple story of how that transparency unfolded a thousand miles away from her college town and touched the lives of a group of women in North Africa.

“Recently I was able to talk with my friend, “Sarah”, who moved to North Africa not long ago. She spoke about the spiritual difficulty she and her team were facing whenever they shared the gospel. Hoping to encourage her, I shared how using simple statements, questions, and stories can show others that we are “spiritual people”. I encouraged her to use a short statement in natural conversation to indicate that she was a spiritual person.

A few hours later, an excited Sarah called me back to tell me what God had just done. She and her teammate, “Jen”, were in the market buying fruit when they saw a woman with three young children running around her. As she observed them, Sarah commented to the mother, “Children are such a blessing from God!” “Wow, no one ever pays attention to me. That is so kind!” the woman said in surprise. Before long she invited Sarah and Jen to her home.

Arriving at the woman’s apartment later that day, they were surprised to find that this young mother had invited all the women from the building to meet Sarah and Jen. The apartment was packed! As they were cooking and talking with the women, their gracious host approached them and said, “Please do what you came here to do.” When Sarah responded in confusion the woman told her that she knew Sarah was a spiritual person and wanted to talk to them about spiritual things.

Grateful for the obvious opportunity from the Lord, Sarah shared the story of the bleeding woman in Luke 8. When she finished, the entire room was in tears. Although their understanding of Jesus is just beginning, they glimpsed Christ’s compassion and power in the story Sarah shared.”

Please pray that all believers would be willing to boldly and openly share their faith by starting spiritual conversations and that the Holy Spirit would lead and guide us to persons of peace.

LEARN HOW TO HAVE SPIRITUAL CONVERSATIONS